Sudoku Kingdom
Sudoku Tutorial
Probably the best way for a beginner to learn how to play Sudoku is to work through a portion of a puzzle that's rated as "Easy". For the purpose of this tutorial, the Sudoku puzzle below has been provided with location references to help you understand the location of what' being discussed: 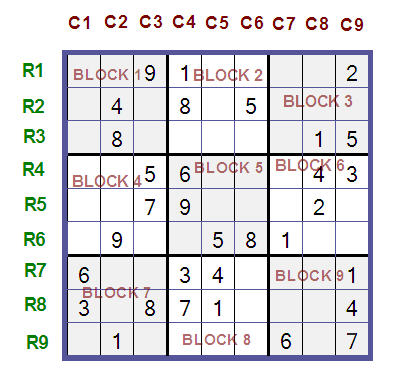 For example, the instructions might refer to R8/C9, which would be the box at the intersection of Row 8 and Column 9, which currently contains the number 4. Additionally, the instructions may refer to a block number, such as Block 1, which in the example shown above contains the numbers 9, 4 and 8 in the upper left of the Sudoku grid.
Keep the rules in mind – each row, column and block must contain only one instance of all of the numbers 1 through 9.

1. Look for a good place to start. You can work vertically, horizontally, or solve within a single block. Since C4 already contains six "givens" – pre-filled numbers – you might want to work vertically first in this column.
2. In C4, the numbers 2, 4, and 5 are still needed to complete the column. If you glance at Block 2, Block 5, and Block 8 together, you should notice that only Block 8 does not yet contain a 5, so it's the only block where the 5 can go. Since only one box in column 4 within Block 8 is vacant, place the 5 in Block 8 at the intersection of R9 and C4: 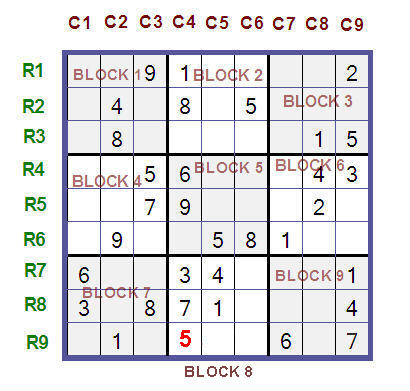 Column 4 (C4) still needs a 2 and a 4, but you're not yet able to pin down exactly where they should be placed, so you need to move on for now. Since you now have five of the nine numbers needed for Block 8, let's see if we can fill in some of its vacant boxes.
3. Block 8 still needs a 2, a 6, an 8, and a 9. Of these numbers, notice there's a 6 already contained in adjacent Blocks 7 and 9, and there's already an 8 in adjacent Blocks 5 and 7. Let's start with those two numbers first.
4. Block 7 contains the number 6 in Row 7. Block 9 contains the number 6 in Row 9. Therefore, the 6 you need for Block 8 must be placed in Row 8. Since only one box is vacant in Block 8, place the six at the intersection of R8/C6: 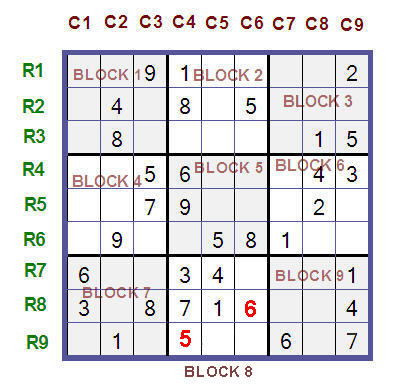 5. Continuing to solve for Block 8, you still need a 2, an 8, and a 9. Notice that Column 6 already contains an 8, thereby eliminating the boxes at R7/C6 and R9/C6. The only remaining vacant box within Block 8 is located at R9/C5, so place the 8 in that location: 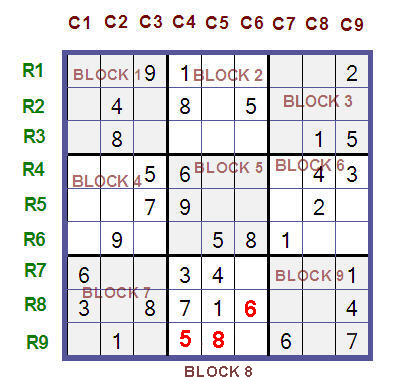 6. You still need a 2 and a 9 to complete Block 8, but neither of them can be reduced to only one position, so it's time to move on again. Let's look at Column 9 (C9) and try to solve vertically again.

7. Which numbers are missing in Column 9? 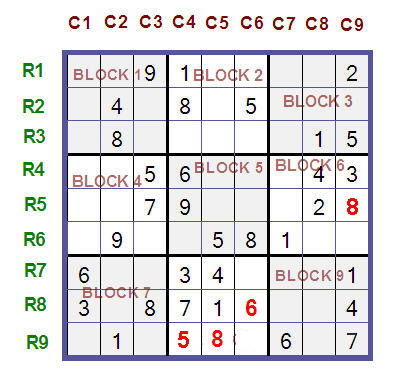 13. When you try the 6, you'll see that there's nothing eliminating it from either vacant box in Column 9. But what about the 9?

14. If you answered that the 9 cannot be placed on Row 6 because Row 6 already contains a 9, you're correct. Therefore, the 9 must go in Row 2 of Column 9. With only one vacant box left in Column 9, you've now determined the location for the 6 through the process of elimination: 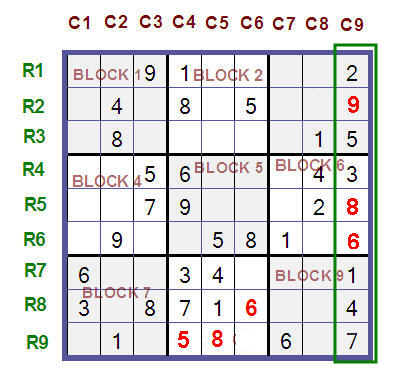 15. Congratulations! You've solved Column 9 in its entirety! You're on your way to Sudoku mastery!

As you continue to work through your puzzles, keep the following points in mind:

· There's no need to guess. If you haven't eliminated a box to a single possible number, keep looking.

· You can work vertically, horizontally, or within a block, you should get accustomed to working all 3 ways and keep them in mind if it seems like you're stuck.

· In the process of completing the puzzle, you'll need to jump from block to block.

· If you make a mistake and end up with two of the same numbers in a row, column, or block, look around before you give up and start over. Can you move one of the duplicates to another location that's allowed and be able to continue?

· Don't forget to look at the big picture. It helps to be able to notice what's already in adjacent rows, columns and blocks, like you did in Steps 2 and 3 of this tutorial. Sudoku takes a keen eye, too!

· If you get stuck on a puzzle, take a break and come back to it later. Sometimes it helps to come back with a fresh outlook, especially if you're tired or in a hurry.

· Don't even think about trying a medium difficulty or advanced level puzzle until you're comfortable solving the easy puzzles first, or else you're likely to get discouraged and not want to continue playing Sudoku.

· When playing on paper, some Sudoku players like to write out the remaining numbers needed for a column or row and then cross them out or erase them as each numbers' place is solved. Here's an example: 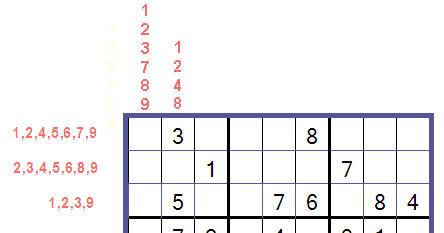 · Others like to put the possible numbers within the box in small print to help them keep track, like this:

· Others work better just saying the numbers in their head, or even aloud. Feel free to experiment with whatever makes you feel comfortable and help you to work more efficiently.

Here's the solution for the Sudoku puzzle used for the tutorial: 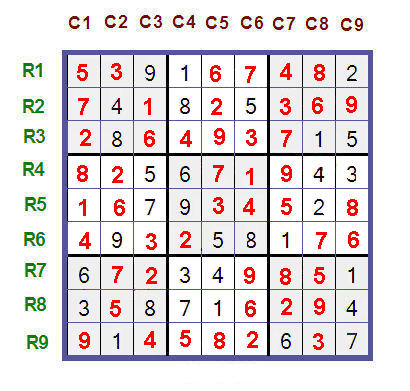